The Port of Maputo is preparing to start on the 29th of April the requalification works of Gate 1, the access gate for heavy vehicles. This project comes within the scope of the signing of a memorandum of understanding between the Maputo Port Development Company (MPDC) and the Municipal Council of Maputo, signed in August 2020, with the aim of carrying out various infrastructure works that aim to rehabilitate , organize, dynamize and requalify the port surrounding areas.

“Works started in the last quarter of 2020 with the requalification of the walkway along Av. Mártires de Inhaminga and the construction of a bus terminal on Av. Zedequias Manganhela for the allocation of buses that formerly congested Praça dos Trabalhadores”, explained the Director of the Port Authority Kristina Abudo.

“All this, in addition to beautifying this area of ​​downtown, has improved access to the Port of Maputo for pedestrians and the several thousand people who work daily at the port”. The works are now reaching their final stage with the requalification of the access for loading and unloading trucks, in the area adjacent to the Luís Cabral district. “This is a work that will not only mitigate congestion problems on the N4, but also provide better working conditions for truck drivers accessing the Port”, explained the Director.

Indeed, with the recent decision by the Governments of Mozambique and South Africa to open the Ressano Garcia / Lebombo 24-hour border, and the exponential increase in the number of trucks, the MPDC management had to move forward with this last phase. “This new area, which has temporary parking spaces, a vehicle inspection area, restaurants, bathrooms and even changing rooms, will make it possible to control the flow of traffic and, in this way, increase road safety. At the same time, we developed an automatic system that allows you to mark the entrance without having to wait at the gate, reducing bureaucracy and improving access efficiency”, stated Kristina Abudo.

Gate 1 is a dedicated access for heavy vehicle built in 2004, through the ceding of the area by CFM for the purpose of developing port access and improving efficiencies, and included the construction of the bypass from the N4.

In May of this year, the Port of Maputo will publicly present its new Master Plan. This new plan foresees an increase in the handling capacity of the Port of Maputo from the current 32 to 42 million tons per year. The vision for the future of the port considers the fundamental principles of port planning in its interaction with the city, port efficiency and sustainable development. 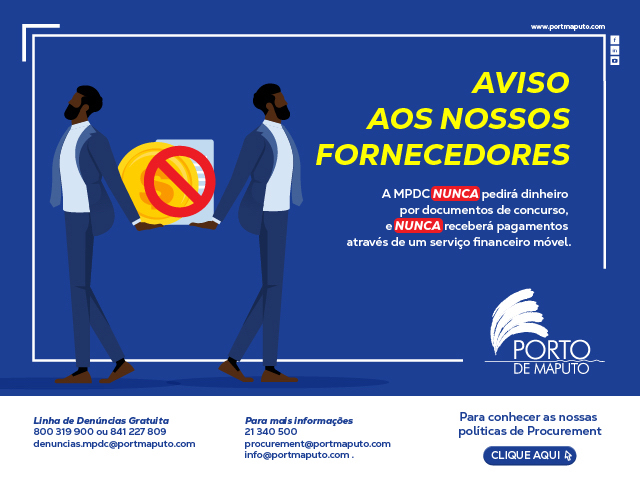